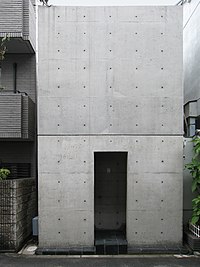 Row House, also known as Azuma House, was built by Tadao Ando early in his career.  It’s location in Sumiyoshi, Osaka, Japan played a big part in the design.  As you can tell from the picture, there are no windows on the exterior of the house.  This was an effort made to the dwellers forget that they were in Japan.  It compensate for the lack of natural light, there is a large open courtyard separating the front and back half of the house.  However, the most fascinating aspect of this two story house it was built completely out of cement and cast in place.